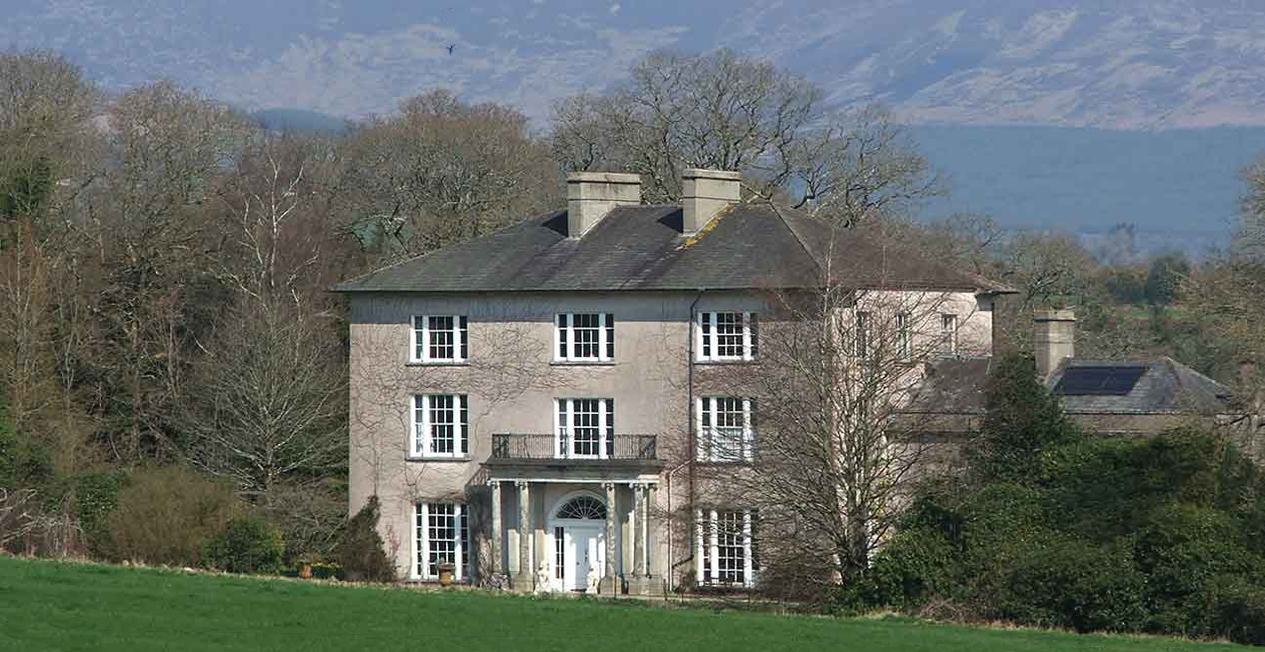 Nestling beneath the Backstairs Mountains near Enniscorthy in County Wexford, Woodbrook, which was first built in the 1770s, was occupied by a group of local rebels during the 1798 rebellion. Allegedly the leader was John Kelly, the 'giant with the gold curling hair' in the well known song 'The Boy from Killanne’. It is said that Kelly made a will leaving Woodbrook to his sons but he was hanged on Wexford bridge, along with many others after the rebels defeat at Vinegar Hill. He was later given an imposing monument in nearby Killanne cemetery.

Arthur Jacob, who originally came from Enniscorthy and became Archdeacon of Armagh, built Woodbrook for his daughter Susan, who had married Captain William Blacker, a younger son of the family at Carrigblacker near Portadown. The house was badly knocked about by the rebels and substantially rebuilt in about 1820 as a regular three storey Regency pile with overhanging eaves, a correct Ionic porch surmounted by a balcony and three bays of unusually large Wyatt windows on each floor of the facade.

The drawing room is exceptionally large, with a fine chimneypiece thought to have come from the original house, while the amazing 'flying' staircase stands in the centre of a square double-height hall without touching the walls at any point. Each timber tread must have been individually fashioned by an especially skilled craftsman, and the staircase is knitted together by iron balusters which connect the treads. A remarkable tour de force of the joiner’s art, its closest parallel is the staircase at Chevening in Kent.

The Woodbrook branch of the family inherited Carrickblacker, an important late-seventeenth century house outside Portadown, when the senior line died out in the 1850s and produced a stolid series of soldiers, sailors and clerics. A racier era began in Edwardian times when Woodbrook was home to a younger son, Edward Carew Blacker, a sporting bachelor whose weekly visits to London were necessitated by his close involvement in running the book at his club, Whites.

Edward usually found time to visit his mistress in Brighton before heading home to County Wexford but her presence was quite unsuspected until shortly after his death when his nephew's family received a heavy parcel in the morning post. The package proved to contain the family jewels, presented piece by piece to his lady friend throughout their long association. She had always realised that they were not his to give away but felt unable to return them during his lifetime for fear of appearing ungrateful and causing him hurt.

Woodbrook lay empty for some years after E. C. Blacker’s death in 1932. The house was occupied by the Irish army during the Second World War and was then extensively modernised when his nephew Robert moved back to County Wexford with his wife and family after the sale of Carrickblacker in the 1950s. Eventually sold in the mid 1990s, Woodbrook and the remains of a once substantial estate was bought by Giles and Alexandra FitzHerbert in 1998. They continue to live in the house with their family today.